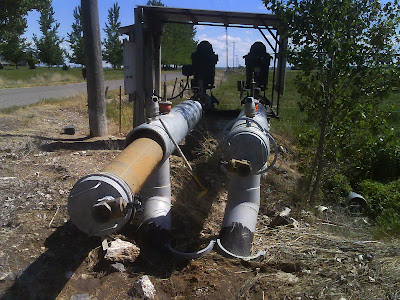 The Picture above is a dual pumping station for two irrigation systems. These are surface water pumps. The water is supplied by a canal system that gets water from the Snake River. Surface water contains a considerable amount of debris. Because the water supply is open to the environment it is full of weed seeds, plant debris, insects, snails, grass, wood, and even garbage among other contaminants. If pumped through a sprinkler system this debris will frequently plug sprinklers. Therefore, the water is pumped through a filter system.

The filters shown above are called "dragon" filters. The water is pumped directly into a large manifold containing a long cylindrical screen inside. The manifold inlet is inside the screen cylinder which means the water must flow through the screen to reach the manifold outlet. In the picture the manifold outlets are the vertical pipes going into the ground. At the end of each manifold is a three inch valve which 0pens to the center of the cylinder. This valve is used for cleaning the filter screen. When the valve is opened water flows directly through the center of the cylinder and out the valve without flowing through the screen. This sweeps the inside of the screen clean. This works well in the short term.

Over time, however, more and more particles become lodged in the screen holes and the screens must be removed and thoroughly cleaned. For this purpose each manifold has an end-cap attached with a clamp. Open the clasp on the clamp, with the pump off, and you can remove the end-cap as well as the screen. In the picture the manifold on the left has had the clamp removed and the filter is pulled half way out of the manifold. Both cleaning processes are quite simple and much easier than constant cleaning of plugged sprinkler nozzles.

There is, however, an element of danger. Notice I said remove the clamp when the pump is off. When the pump is on the water is pumped at about 70psi. Open the clamp with the pump on and the end-cap/screen will shoot out of the manifold like a torpedo. Seems simple enough. Don't remove the filter when the pump is on. It is a little trickier with this system because these are secondary pumps that were installed as part of a mitigation agreement due to ground water shortages due to an extended drought. Each of these irrigation systems has, as a primary pump, a ground water well. In order to lift water from more than 100 feet below the surface, and produce enough pressure to run the irrigation system these wells require larger pumps which produce about 100psi. Making your filter "torpedo" even more dangerous. Both systems are set up so that only one pump on each system can run at any given time but it is still important, when removing a screen, that neither pump for that system is running.

Last week, on Wednesday afternoon, two careful, conscientious farmers, dad and I, went to clean the screens on both filter systems. Only we didn't make sure both wells and surface pumps were off. On one system we left the ground well running. The first clamp came right off, but, because the pipe was under pressure we had a difficult time removing the clamp from the second manifold. (This is where a HUGE light bulb should have gone off!) As we struggled to open the clamp dad placed himself directly in front of the end-cap. We got it open! Instantly the torpedo was launched, propelled by 100 pounds per square inch of water pressure. Faster then I could blink dad was ten feet away on his back. 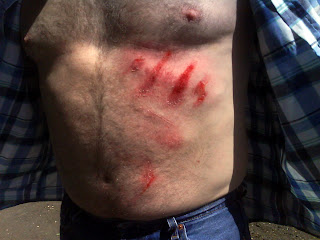 Being the consummate photo-blogger I, of course, made him pose for a picture BEFORE taking him in for medical treatment. He is fine. Obviously some contusions on his torso, quite a bit of bruising, and lot of soreness. No broken ribs, though one was partially torn from the sternum, and no internal organ damage. Both elbows were cut and he has contusions on both shoulder blades and his lower back from hitting the ground very hard. One hand was bruised and sore as it was apparently in front of his body and one leg was quite sore. We are not sure why. He had quite a bit of soreness in his neck and a concussion that left him a little foggy for about three days. Today he is doing fine other than a little soreness in his ribs.
All in a days work on the farm. So, then next time you are enjoying a slice of american cheese take a moment to remember the sacrifice dad made in order to put that food on your table.
at 10:07 PM