More From the Chukars Game

Following the game the short stop from the opposing team, the Helena Brewers, called Jacob and I over to the fence and handed Jake, over the heads two other kids, a game bat. We waited around after the game for the players to come out so Jake could get the short stop to sign his bat. Jake got the autograph as well as a couple more on his hat plus one from the mascot, Charlie Chukar. It was a good night. One that Jacob will never forget. He will likely be a baseball fan for life.

By the time the night was over Josh had a bat from the third baseman and Josh's teammate, Nick, had a few signatures on his hat too. This all came on the heals of running into four Brewers players the previous night at Denny's. We talked to them and they signed Josh's hat. They then recognized us at the game the following night which lead to Jake getting a game bat.

Both Pictures were taken while waiting for the Brewers to exit the locker room. 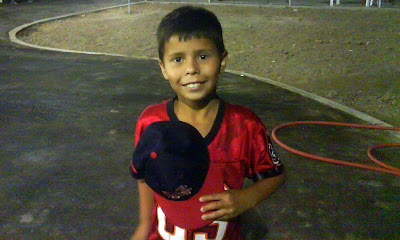