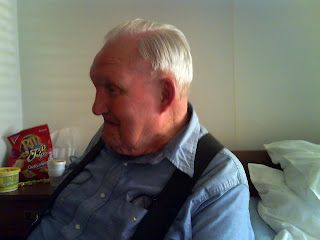 His name is Elmer Franklin Johnson. This picture was taken January 4th of this year as he recovered from pneumonia in the long term care ward of the county hospital. It was his second case of pneumonia in less than a year. He returned home a few weeks after this picture but returned again later in the year after elective surgery resulted in an infection and the removal of a toe and part of his foot.

He was born in Swea City, Iowa in 1916. As a teenager, during the great depression, he left home in search of work, often riding boxcars from town to town in search of harvest and farm work.

He often recounted how his commanding officer ordered all the marines on board to heavily arm themselves before abandoning ship so they could swim to the nearest island and launch a ground offensive. They soon found that it is not practical to be heavily armed in the water while trying to escape the undertow of a sinking cruiser. The Marines quickly shed their arms and waited for rescue.

In 1943, while on leave, he married Harriet Cresap. In 1946 he was honorably discharged from his military service. Upon his discharge he moved his family to Blodgett, Oregon, bought a truck, and went into the logging business. In 1952 the family moved to the San Joaquin Valley in California. The family finally relocated permanently to Idaho in 1966 where Elmer bought a Dairy and returned to farming.

For several years, in the early eighties, Harriet and Elmer would take my cousins and I on a trip for a week or two each summer. We visited places like the Olympic Peninsula, the Grand Canyon, Yellowstone Park, Bryce Canyon, Zion Park, Badlands National Park, Devils Tower, Mount Rushmore, Jackson Hole, the Black Hills, the Little Bighorn Battlefield, and many more. It instilled in me a life-long love of learning and seeing new places.

In 1985, after 42 years of marriage, he lost his first wife Harriet. Twenty-two years later, on November 1, 2007 Elmer passed away. Funeral services were held Monday, November 5th. He was preceded in death by two wives, five sisters, three brothers, and one grandson. He is survived by one sister, five daughters, one son, four grandsons, 10 granddaughters, and 29 great-grandchildren.

Thank you for all you have given me, grandpa. Rest in peace.

"Just a Farmer", you said
And I laughed 'cause I knew
All the things that farmers
Must be able to do.

They must study the land,
Then watch the sky
And figure just when
Is the right time and why -

You know the books
That farmers must keep
To pay all those taxes
And be able to sleep.

And you know the fixin'
That farmers must do
When machines like mad monsters
Blow a gasket or two.

I guess when God needed
Folks to care for His earth
He chose "just farmers"
'Cause He knew their true worth.
-Helen Coon