The Problem With Micro-blogging

Here is the problem with twitter. Sometimes when you share your thoughts and activities in real time it is easy to forget to share them again, later, on your blog. Even when it is something like your middle son getting hit in the face with a baseball and breaking his cheek. Two and a half weeks ago that is exactly what happened to Josh as you can see in the picture below. 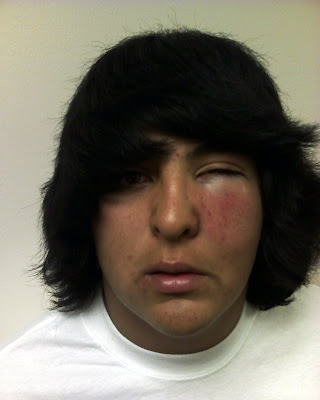 Finally, tonight, I was reminded of this omission when reviewing pictures I took this evening for the American Legion team. The towering kid in the back row is the one who threw the ball that hit Josh in the face. Click the picture to get a true feel for how big this kid is. The man next to him is the coach if you need context. 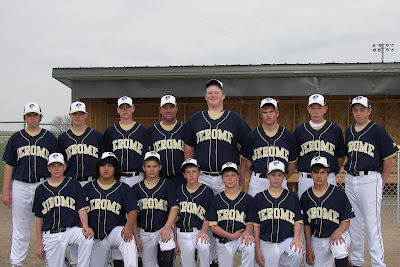 *Note: I should add that Matt is a gentle giant. He is one of the funniest, nicest kids you could ever meet. When I found out what happened I told Josh, "that's too bad because there is no way you are getting ANYONE to kick Matt's ass for you." This is true not only because no one in the High School is big enough to kick Matt's ass but also because I can't imagine anyone every wanting to kick Matt's ass. Besides, even if anyone ever wanted to he would have them in stitches from laughter before they could ever start the job.
Once last summer Matt hit a single late in a close game. The coach sent in the smallest kid on the team, Michael, to pinch run for him. As the kid approached first base Matt looked at him with a dead serious expression on his face and said, "what do you think your doing?" Michael replied, "coach sent me in to pinch run." Matt looked down at the poor kid and said, "I don't need no pinch runner. You get back in the dugout." Michael looked back at the dugout with terror on his face then Matt broke out into his trade mark grin and said, "nah, just kiddin' you. Get on the bag so I can go sit down." He had the whole team rolling on the floor of the dugout.